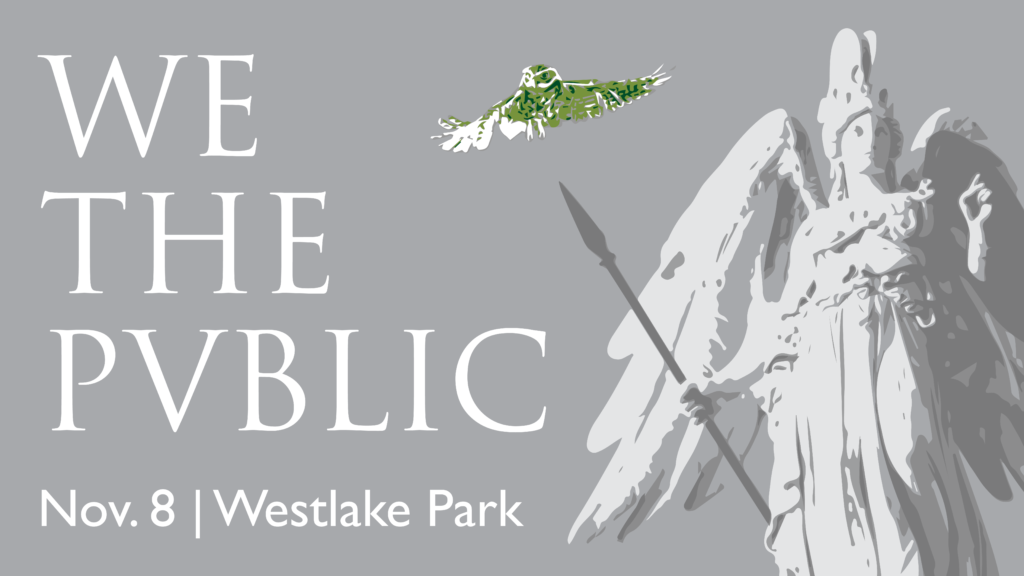 Citizen University TV made a 3-minute video clip about this event, in which artists led us in exploring how we talk about politics today, on the 1-year anniversary of Election 2016.

We the Public Event Photos

On the night of last year’s presidential election, many of us in Seattle waited together in a celebratory anticipation that dissolved into numbness and silence.

Something emerged in the days that followed—a sense of community and vulnerability that felt rare, and nourishing. Many of us questioned all of our assumptions. Many sat uncomfortably in uncertainty. Many reached out to others, seeking connection in a way that’s often forgotten.

November 8 marks one full year since Election 2016. Please join your neighbors and local artists in Westlake Park as we reflect on this year in American politics and dialogue. Grab some free hot chocolate while it lasts, and see some art and performances exploring how we talk about politics today. Despite the inevitably challenging theme, we hope you’ll also leave feeling nourished and connected.

WHEN: Wednesday, November 8, 5pm-8:30pm
WHERE: Westlake Park (401 Pine Street, Seattle, WA 98101)
This event is free and open to the public. All ages and political affiliations are welcome.
Smartphone users: bring earphones to add to your experience.
RSVP: Click here to RSVP on Facebook!
CONNECT: #WeThePublic | If you have questions about the event, please contact info[at]betweenamericans.org

Dog in the Park and Bobachine are staying open late for this event. Depending on RSVP levels and interest, we may also be able to get some food trucks to stick around for the evening. We’ll have hot chocolate, hot apple cider, tea, and a handful of electric heaters to keep you warm.

Participating Artists & What To Expect

On November 8, feel free to drop by Westlake Park any time between 5pm-8:30pm, or come right at 5pm and stay for the whole thing! Performances will occur throughout most of the evening. There will be occasional breaks in programming to give everyone a chance to chat with the artists about their work, browse the other art pieces displayed throughout the park, or just grab a hot beverage and reflect on the past year.

Below is the line-up of confirmed artist participants. Click on the links to learn more about the artists and their work. Some artists also submitted audio recordings of themselves talking about the work they’ll be presenting at We the Public.

Volunteers needed for setup 2:30-5pm and breakdown 8:30pm! Artists and volunteers will be fed somehow.

What’s with the owl and the statue?

Minerva was the Roman goddess of wisdom. In Greek mythology, she was called Athena. Minerva/Athena is often accompanied by an owl, and this owl is also seen as a symbol of wisdom and knowledge.

The philosopher Hegel suggested that we come to comprehend events only in hindsight, at a time when things can’t be changed—but rather, merely understood.

“The owl of Minerva spreads its wings only with the falling of the dusk.” —G.W.F. Hegel

In the nascent democracies of Athens and Rome, public spaces were mixing grounds for political chatter. In that spirit, we want this event to provide a place and time for reflection with friends and strangers alike.

We the Public grew out of the initial concept for Between Americans: to re-open emotions from Election 2016, a year later, and see what else they might have to teach us. As Between Americans evolved into a conversation between people who voted for Clinton and for Trump, we met The Evergrey along that journey.

The Evergrey takes a community- and dialogue-based approach to media, in sync with the spirit of this event. We’re excited to have them as our Media Partner! You can sign up for their daily Seattle-area newsletter here. 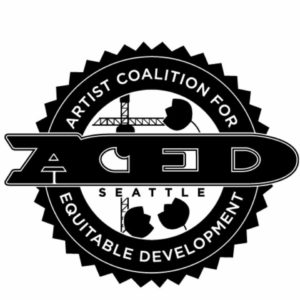 Seattle ACED is a group of artists and activists working on creative advocacy for equitable development, beginning in the Central District. They’ll be bringing their gifts of art, spoken word, and music to share a bit about the process of working with developers to have a dialogue.

Thanks to the City of Seattle Office of Arts & Culture for pitching in with a smART ventures grant!